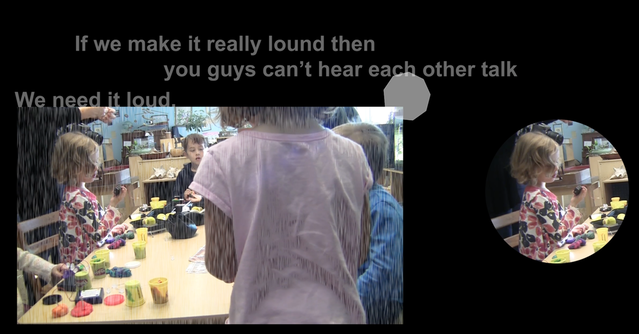 ​Recent findings in the field of quantum physics identified that the instruments used to understand phenomena define the ontology of matter and assert that the materiality of past, present, and future is constantly reconfigured (Barad, 2003; Barad, 2007; Van Der Tuin & Dolphijn, 2012). This calls into question many of the assumptions undergirding the field of education. These findings suggest blurrier notions between people and materials–how they respond to one another and mutually shape each other through intra-action (Barad, 2003). Furthermore, notions of agency (i.e., the ability to act) are now being seen as not resting solely with humans but as coming about through intra-action among unspecified, changing, and entangled components contrary to actions between bounded objects (Barad, 2003; Grosz, 2010; Jackson & Mazzei, 2012). This presents an opportunity for the CSCL community to broaden traditional notions of collaboration and to consider more active roles materials can take beyond mediating people-to-people collaboration. Collectively these threads have been taken up within material culture studies (e.g., Ingold, 2012; Tsing 2015), cultural studies (e.g., Behar, 2016; Shabbar, 2016), and literacy studies, which have started to build on these perspectives to question the role of materials as drivers of processes through which people learn (e.g., Hultman & Taguchi, 2010; Taguchi, 2009; 2014; Taylor & Ivinson, 2013; Jackson, 2013; Jackson & Mazzei, 2013; Kuby & Rowsell, 2017; Wargo, 2017; 2018; Wohlwend, Keune, & Peppler, 2019). Particularly within education, new materialist and posthuman perspectives, encompassing ethico-onto-epistemological approaches, investigate the overlooked inequitable workings of materials for educational possibilities (e.g., Ivinson & Renold, 2013; Thiel, 2015; Jones et al., 2016; Thiel & Jones, 2017; Wohlwend, Peppler, Keune, & Thompson, 2017; Keune & Peppler, 2018), new ways of conceiving the nature of STEM disciplines (de Freitas & Sinclair, 2013; 2014), as well as methodological innovations (Kuntz & Presnall, 2012; Mazzei, 2013a; 2013b; Koro-Ljungberg, 2016). Across this shared work, these scholars question the mediational roles of materials as subordinate to people, instead flattening hierarchies among people and materials and recognizing more-than-human forces and rhythms of actions (e.g., de Freitas, 2017) in the production of people, materials, and learning possibilities.

These ideas radically rupture the traditional role of materials as mediational means and sources of internalization important to the field of learning sciences and CSCL. These emergent perspectives suggest at least three broad shifts (a) from social/material interaction to material/social more-than-human intra-action, (b) learning seen as a linear progression to one of transformative and materialized repetition, and finally, (c) an emphasis on human agency in the design process to an emphasis on critical material design. Despite the promise to uncover learning processes that have thus far gone unnoticed, these perspectives remain peripheral to the learning sciences and CSCL communities. Emerging work began to explore synergies and tensions between posthuman and more traditionally employed theoretical approaches to learning, including constructionism and mediated discourse theory. For example, posthuman theory of learning can broaden constructionist perspectives of materials as cognitive drivers to show the co-development of people and materials (Keune & Peppler, 2018) and can present world making possibilities of material-child intra-actions that extend what can be perceived as learning from mediated discourse perspectives (Wohlwend, Keune, & Peppler, 2019). Collectively, this work suggests that deepening posthuman perspectives in the learning sciences requires the development of methodological approaches that are aligned with these views, strengthening theoretical arguments that address key skepticisms, and forging directions for the design of intra-active learning environments. Therefore, it is our intention to use this workshop as a collaborative space to advance our current understandings of the implications of materialisms and other posthumanist views of learning within the learning sciences.